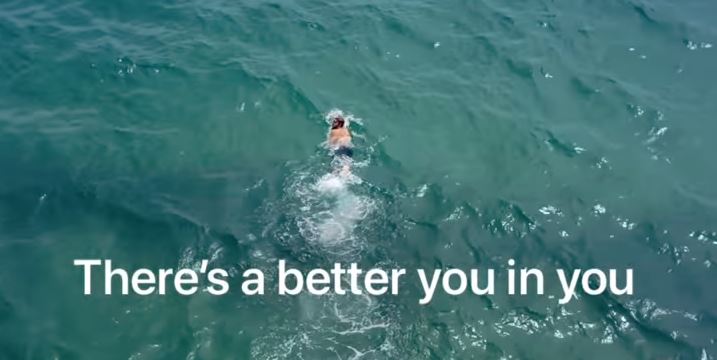 I really, really like the new commercial for the Apple Watch.  If you haven’t yet seen it, I encourage you to watch the embedded video.

There are a couple of things that really resonate with me in this ad.  First, I find it hugely motivational.  So many fitness ads feature an actor/model/athlete that is in such good shape that it’s hard for most of us to imagine attaining that look or level of physical fitness.  It’s too much of a leap to make the connection between where we are now and the state the advertiser is proposing.

The “There’s a Better You in You” commercial starts not with an athlete, but rather just a normal, mostly sedentary guy.  He looks tired.  He’s drinking coffee.  He looks to the chair next to him and sees another, slightly more cheerful version of himself.  That other version takes the first step toward bettering himself – he simply stands up.

As the commercial progresses, the actor (and all of his cumulative, better versions) keep seeing a more active and healthier version of himself: walking, briskly walking, jogging, running, then sprinting and then finally diving into the ocean for a swim.  Each iteration of the actor looks at the slightly better version and decides “hey, I can do that” and then steps up to the challenge.  If we can envision a better version of ourselves, we can act to make that vision a reality.

The second reason I enjoy this commercial so much is that it reminds me of how I was first taught Lean so many years ago.  The instructor told us that the world “kaizen” (which many folks define as “continuous improvement”) actually comes from two Japanese words: “kai” and “Zen”.  Most of us have a good idea of what “Zen” means – it’s that place where things are in balance and harmony, an ideal state.  The instructor told us that one translation for “kai” was “small step”.

Hence, “kaizen” translates to “small step toward the ideal state”.  Apple’s “There’s a Better You in You” commercial portrays exactly that.  You don’t go from couch potato to triathlete in a single, big leap; you get there by taking small steps.

I believe a lot of companies are like that sedentary guy on the couch, uncertain how to start their Continuous Improvement journey.  To them, I would say, “there’s a better company in your company”.

We use cookies to ensure that we give you the best experience on our website. If you continue to use this site we will assume that you are okay with that.Ok